Tight-coupling and Loose-coupling between objects

1.    While creating complex application in java, the logic of one class will call the logic of another class to provide same service to the clients.

2.    If one class calling another class logic then it is called collaboration.

3.    When one class is collaborating with another class then there exists tight-coupling between the two classes.

6.      In the above traveller class and car classes, car class object of dependency for traveller object.

7.    In the above example traveller object is tightly coupled with car object because in place car object  if you want to use bike object then, we need to make changes in Traveller class

1.    In Loose-Coupling, when one object is depending on another class object, some external entity will provide that dependency object to the main object that external object we call as a Container.

2.    In order to get loose-coupling between objects the following two rules are required 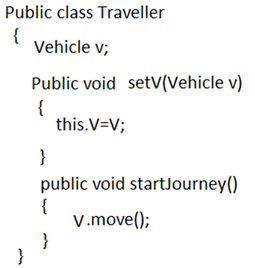 3.    In the above traveler class, an external entity injects either car (or) Bike object.

4.    In traveler, these are no changes required we are shifting the dependency from car to a Bike.

5.    In the above traveler class, we are token vehicle reference, so that an external object (Container) can injects either car object (or) Bike object, depends on requirement if a traveler.

7.    Spring frame work is much success because of one of the main reason is it promotes Loose-Coupling between the objects.